And here’s what we found: there wasn’t a clear winner.

It seemed like every headset from every vendor offered something special.

Oculus with its headsets provides amazing casual experience and quality for the buck. The HTC headsets are well known for their image quality and color balance.

The user-friendliness and accuracy of Valve Index is unparalleled for VR business applications. Naturally, there are also mega high-end hitters like Varjo or Pimax which we will be writing about soon since the prices are unaccessible to most individuals and smaller companies.

HP didn’t seem to like the current landscape at all. Perhaps something between Oculus Quest and the Valve Index could fill the market.

In collaboration with Microsoft and Valve, HP decided to release a light-weight headset PC VR headset and tried to include as many great features as they could.

HP named the new headset HP Reverb G2 and priced it at $599.

They exceeded all our expectations in some places. In others, not so much.

In this guide we’ll share everything we learned about the new headset.

To put simply, HP Reverb G2 knocks it out of the park with its astonishing and borderline photorealistic quality of picture.

And there are several reasons for it.

The colors are intense and vibrant, which makes you think that the headset is actually using an OLED display.

Unlike its predecessor, HP Reverb G2 is mura-free which means you’ll be able to see the edges of your screen as clearly as the center. The same goes for displaying text — the letters in VR look incredibly sharp even when you read from a far.

The new HP headset uses a completely revamped pair of Fresnel lenses that are a huge step-up from the ones the original Reverb headset, the G1, used. The new lenses were designed by Valve, and even though Valve Index had a slight problem with glares, there’s no such thing with G2.

G2’s field of view is around 114 degrees, which is bigger than that of Oculus headsets and slightly smaller than what you have with Valve Index. In general, the screen door’ effect is far less than the original Reverb and any other WMR headset from the past.

The Reverb G2 is the first Windows Mixed Reality headset that doesn't look like it's a prototype. Its design, however, might force you to take extra steps to ensure the device stays in place while you're wearing it.
The head strap system is similar to the one seen on the Oculus Quest, and thus less sophisticated and less comfortable than that of the Rift S. The back of the strap feels more comfortable in comparison to the second Quest. The rubber nose piece also adds a level of comfort to the experience.

The fabric of the headband, however, feels thin and fragile. The material feels like you can snap the thin side extension by applying a bit of pressure.

Some users report that the headphones can feel uncomfortable on their faces to the front and can hurt their cheeks after long use. However, the sensations are largely determined by your face size. You may want to improve the quality of your G2 experience with some comfort upgrades, such as the FRANKENFOV MOD. The mod utilizes Samsung Odyssey's cover and offers comfortable fit for the longer wear time.

With the Samsung Odyssey cover you can experience long VR sessions without fatigue of the eyes or fogging of glasses, and can extend the Field of View to Valve index levels.

The cable coming out of the headset is as delicate as a spider's web, so make sure not to bend it too much. If you want to avoid Windows Mixed Reality crashing out, make sure that the cable doesn't bend more than 10 degrees.
Occasionally, some users report that their headset does not recognize the USB port. It may appear that your device cannot detect any ports, however the source of the problem remains unknown. The following troubleshooting steps should help you out if you encounter this problem:

HP Reverb G2 provides users with great spatial audio sound of the highest-quality because it uses the same speakers as Valve Index does. And Valve's audio system is currently rated as one the best on the market.

The removable headphones float over your ears by 10 mm and can be adjusted for custom fit. The only thing to mention is that the brace works a bit differently compared to Valve’s mechanism and the adjustment levels are a bit more limited. 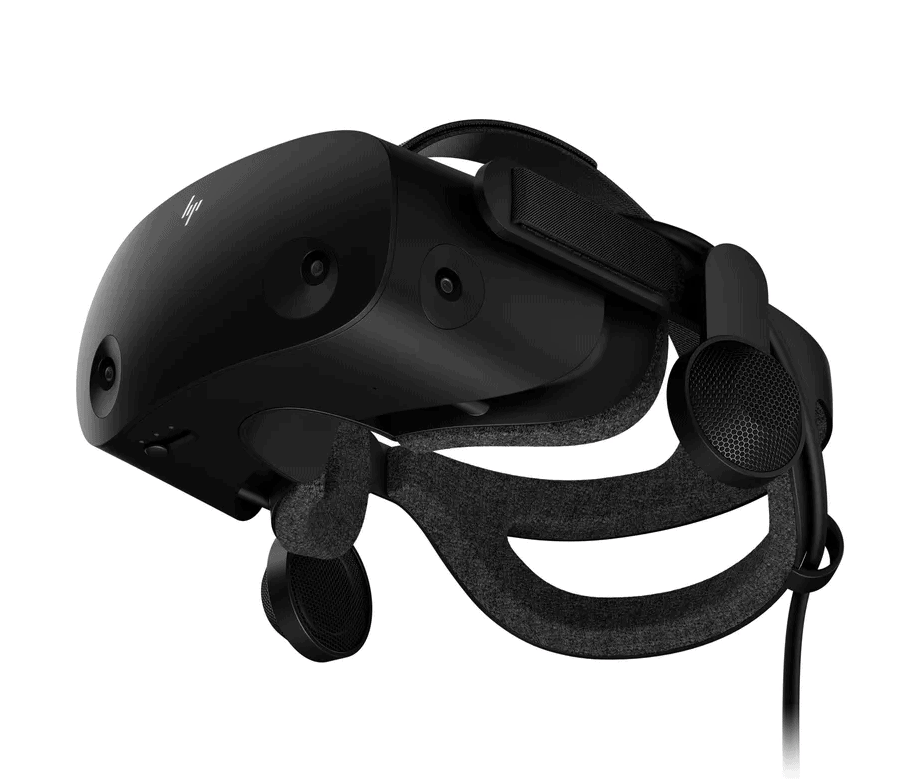 The current demo headsets don’t feature 3.5 mm audio jack, so you won’t be able to use your own headphones with it. Given the high out-of-box quality of speakers you probably won’t need to.

As for the microphone, the new Reverb uses the one that is different from Valve Index, but the quality is great for the money.

Surprisingly, system requirements for the HP Reverb G2 are similar to the original HP Reverb headset even though there’s a dramatic difference in visual quality between the two headsets.

Here are minimum hardware requirements for PC to work with HP Reverb G2:

You can learn more about VR hardware requirements and whether your PC can run different VR applications with our VR requirements guide.

HP Reverb G2 features a pair of motion controllers with a design and ergonomics very similar to that of Oculus Touch controllers. To achieve that HP took original Windows Reality controllers and redesigned them from the scratch, removing unnecessary complexity and flawed ergonomic design. 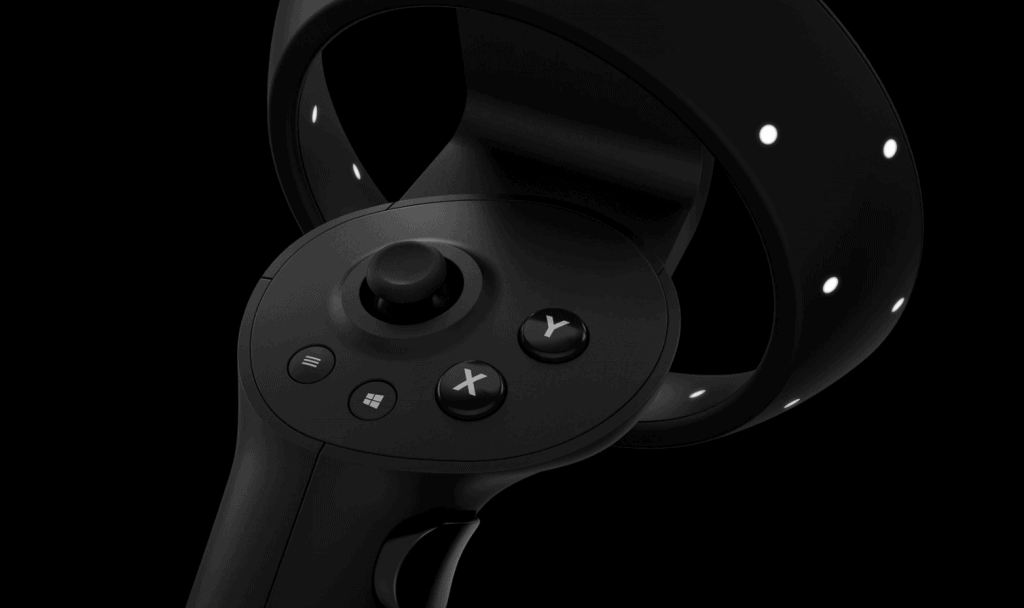 The controllers are much more comfortable than the ones in the original Reverb. But they are still lacking when compared to Oculus Touch controllers. Analog sticks are a bit small, slippery, and come with some resistance.

Sometimes thumbs can become detached from fingers during frantic movements. It seems like controllers are a bit heavy, causing your actions to feel stiff and slow while tracking rings keep colliding all too often.

Note: G2 controllers also do not support finger tracking so you'll have to use the Valve Index controller if that’s something you need.

HP Reverb G2 sports a 6 degrees of freedom inside tracking system with four cameras placed in front and at both sides of the headset. With the inside tracking you don’t need to install any external sensor strations to track your movements, unlike with Valve and HTC Vive headsets.

G2 tracking is based on the Windows Mixed Reality tracking system, but provides greater accuracy due to the doubled amount of cameras.

G2's inside tracking system isn't as advanced as Oculus Quest 2 and Rift S. Due to the placement of cameras, G2 can lose track of controllers at the extreme top and bottom positions, whereas both Quest and Rift S don’t have such issues.

People who like to keep their hands near their chest or waist-level in games or business applications will often find controllers drifting away from each other or dropping down to the floor.

Follow these three tips for better tracking in G2:

The Valve Index Lighthouse tracking system is still the most advanced on the market. Because of the sensor stations placed around your room the Lighthouse system can track any movement you make in VR whether you use controllers at extreme angles or behind you.

How HP Reverb G2 Compares With Other Headsets

The new Reverb G2 leaves far behind all Oculus and HTC headsets in terms of visuals.

As for the tracking, this is where it gets tricky. Both HP Reverb G2 and Oculus Rift use an inside tracking system whereas HTC Vive requires a complex and costly setup with external base stations to track your movements in VR.

Overall G2’s tracking system is on par with the accurate tracking that Oculus provides for its headsets except that Oculus headsets can cover more extreme positions at the top and bottom due to the additional tracking cameras.

If we take into account the current price for G2 at $599, the new HP headset beats all HTC and Oculus models given how much you get for the money — at least trough performance perspective.

You can learn more about how HTC and Oculus flagship headsets compare to each other in our in-depth guide on Which Headset Is Better For Business and Personal Use.

As with the other headsets, HP Reverb G2 outshines Valve Index with its stunning picture quality due to the high-quality resolution of display.

Valve’s Lighthouse tracking system is currently the most advanced tracking system on the market. If you’re dealing with VR applications that require extreme degrees of precision, such as complex business and training applications, Valve Index should be your main option.

Should I buy the HP Reverb virtual reality headset?

The short question to your answer is: It depends. (I'm sorry)

Currently HP Reverb G2 looks like one of the best VR headsets for the money if you’re in the consumer-facing PC VR market, but you might spend a few extra bucks to get there.

G2 can be upgraded to a higher tier via a series of extensions and mods for maximum comfort and tracking capabilities, e.g. switching to Valve Index controllers, comfort mods, gunstock for games, and so on.

If you are a vivid VR player with a solid PC setup, G2 might provide you with the best in-game VR experience to date with its amazing visual and immersive spatial audio experience.

When developing VR applications for your business, however, you’re better off choosing a headset with more advanced tracking capabilities like Valve Index. [In Late 2021, HP released a version 2 of HP Reverb G2 that addressed the tracking issues and improved them.] It does however have lower refresh rate - 90Hz vs Valve's 120 Hz.

The HP Reverb G2 HMD (head mounted display) was released in November of 2020, You can order it on the HP official website, Steam, Microsoft Store, and a few selected partners.

Update [Feb 2022]: HP has released a Version 2 of the HP Reverb G2 with essentially same hardware specs. However the challenges from the first version were addressed and improved which makes the Late 2021 Reverb G2 one of the best headsets you can buy under $1,000 and should be a main choice and a new standard for playing VR games.

Receive our newsletter to stay on top of the latest virtual reality and augmented reality info.